How to use Tombow Fudenosuke Brush Pen?

I bought the Tombow Fudenosuke Brush Pen WS-BH and since I only used their Dual Brush so far, I decided to do a little review.

Inking a sketch with Tombow

Done only with the Tombow Fudenosuke Brush pen  ws-bh.

READ MORE: 5 facts you should know about marking pens

Written only with the Tombow Fudenosuke Brush pen  ws-bh.

Tombow Fudenosuke can be considered as a good calligraphy brush pen for beginners.

Tombow with others markers:

The pen is pigmented and water based, it’s also waterproof. More important, it doesn’t bleed!  I run a little test with different markers, water and alcohol based from different brand to see how inks mix together. The brand used are Copic,Promarker, Tombow Dual brush, DB-twin, Koi de Sakura, Créa Marker and Winsor & Newton. As you can see, it doesn’t bleed at all. In fact, the ink looks more vibrant, which is a plus as I wish the black ink was darker.

I wish the black ink was darker and I do have the impression that the pen is not going to last as long as a micron. It’s just an impression, time will say.

You can’t replace the tip and it’s non refillable but it’s cheap, I bought it for 2€90.

If you would ask me how to use Tombow Fudenosuke pen, my answer would be simple. This pen is very versatile, easy to use in different kind of work, doodling, lettering, outlining, name it. It’s a pretty good pen! You don’t have to change pens while inking, to get different lines thickness, so it’s a gain of time and practical.

Verdict:  I love it and I’ll buy it again.

***** Edit: 13th january 2019. The pen last quite a long time but not as long as the micron. Also, they now have different colors besides black!

You have Successfully Subscribed! 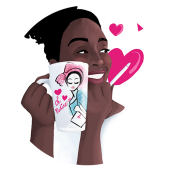 French Vector & Digital Illustrator living in Asturias (North of Spain) with Husband, kids, pet and lots of crazy ideas in her heads.

Drop me a line!

If you would like to book me for an upcoming project or custom illustration. Please send an email at info@nadinemnemoi.com

Copyright. Nadine Mnemoi. All rights reserved.Please do not take the images or use them in any way, shape or form. None of the images contained within this blog are public domain nor are they royalty free images.